Self-Coaching: How We Get In Our Own Way Part I – Behaviors 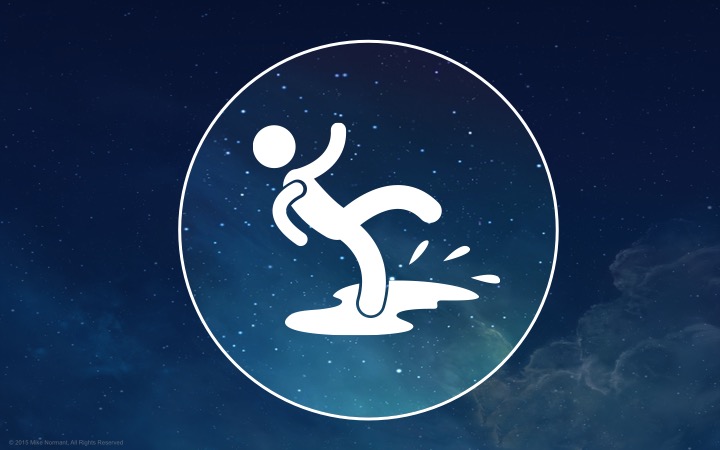 I’ll share how making small behavioral shifts can lead to big changes, literally ‘bending your future’ for the good. Finally I’ll share research that highlights the importance of framing the desired change in an aspirational format to make it more likely you’ll be successful in your efforts.

In prior blogs in this series, I’ve provided a working definition of self-coaching and suggested that this process/practice can help drive higher levels of employee engagement and retention.

I highlighted that self-coaching involves building self-awareness in three areas: Attention, Self-Limiting Behaviors/Patterns, and Self-Limiting Stories. In my last blog, I did a deeper dive on the first of these three areas, awareness of attention.

We may limit ourselves through our behaviors, our thoughts, or through both, since behaviors and thoughts are often intertwined. Today we’ll look at our behaviors.

By the way, behavior may be a loaded term for some people. I use this term literally and non-judgmentally; ‘the way in which one acts or conducts oneself.’

It may seem obvious, but most of us don’t just decide to change a behavior and make it so. We must first acknowledge that one or more of our behaviors is detrimental to our success, whether it’s at work and/or in our personal life. This requires some self-observation and the willingness to identify behaviors that don’t serve us.

To ensure we’re aligned on the concept, here’s a list of some relatively common self-limiting behaviors. Scan through this list and see if one or more resonates with you.

Whew! That’s a lot of opportunity for us to get in our own way. And this is not an exhaustive list.

When I share this list, it is most common for people to identify with multiple items. However it’s also normal that some people don’t identify with any of the behaviors listed. While it is possible that a person doesn’t have any self-limiting behaviors (SLBs), I’ve not yet met somebody who matches that description. So, you may not see your SLBs, but…

Most of us are familiar with the concept of a blind spot as it pertains to driving. These are certain places around our vehicle that are not visible to us through our mirrors at a given moment in time. Awareness of that blind spot is key to being a better driver as it makes us hypersensitive to looking more intentionally to see what’s there (e.g., before switching lanes).

Well, we as humans also have blind spots regarding our own behaviors. Unlike with the car mirrors example, many of us typically operate without wanting to ‘see what’s there.’

There’s a useful tool that can provide a bit more context on this. It’s called the Johari window. The Johari window was created in 1955 by two American psychologists, Joseph Luft (1916–2014) and Harrington Ingham (1914–1995), to help people better understand their relationship with self and others. The Johari window is a four quadrant that looks like this: 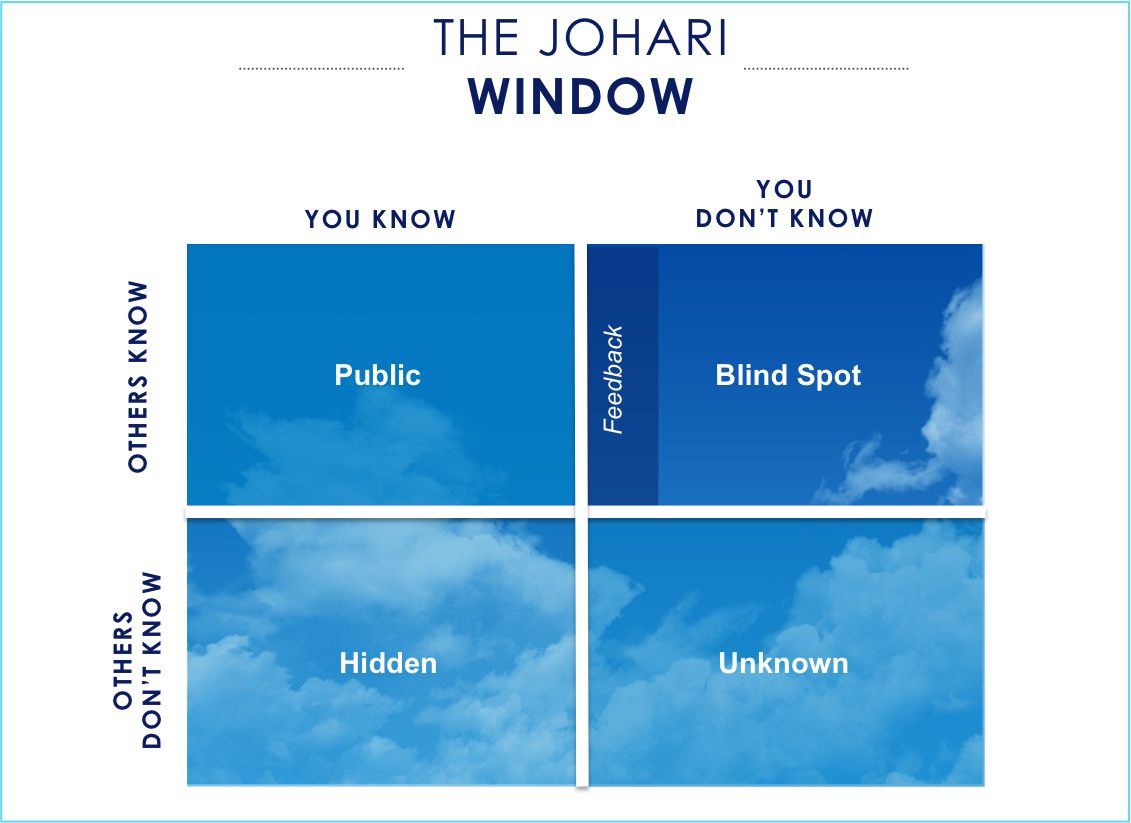 This is a really useful framework to use to reflect on how you see yourself vs. how others see you. As you can see there are four quadrants in this model.

The ‘Public’ or ‘Open’ quadrant: This quadrant represents things about you that both you and others are aware of.

The ‘Hidden’ or ‘Façade’ quadrant: This quadrant represents things about you that you are aware of, but others are not.

The ‘Blind Spot’ quadrant: This quadrant represents information about you that you are not aware of, but others are.

The ‘Unknown’ quadrant: This quadrant represents information about you that neither you nor others are aware of. It could be that some traits do not exist or that there is collective ignorance of the existence of some traits. There will always be things about ourselves that are unknown or unknowable.

As you begin to consider your own self-limiting behaviors, keep in mind that you may not be aware of some of them. The way to raise your own awareness to your blind spots is to seek out feedback from others whom you trust. Soliciting candid feedback from others is a skill that will serve you well in your career and your life…primarily because it will reduce your blind spots.

Some of our self-limiting behaviors (SLBs) are deeply entrenched habitual patterns that are years or decades in the making. The idea of shifting even just one such behavior can be daunting and trigger significant internal resistance. “It’s just too big to tackle” or “It’s just the way I’m wired” are likely flavors of self-talk that emerge when we begin to confront one of our own SLBs.

It doesn’t need to be daunting. Think of a meteor on a collision course with Earth. Scientists believe (and hopefully they are right!) that if this were to occur, we could send a rocket into space and create an explosion that would just nick the trajectory of that meteor…less than a one-degree course change. And the meteor wouldn’t just miss the earth; it would miss it by miles. 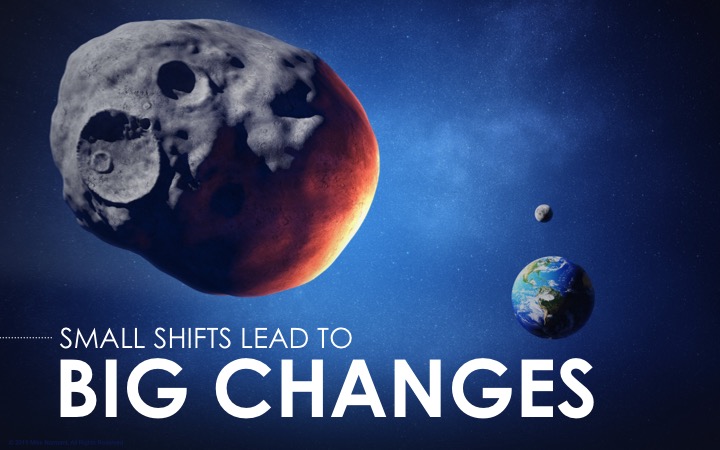 If you think of your life or career as being on a trajectory, the same concept applies. By making small shifts in your behavior, the cumulative effect on your trajectory over time can be profound.

Amy Cuddy, famous for her viral TED Talk on power posing, has recently published a new book called ‘Presence – Bringing your Boldest Self to your Biggest Challenges,’ in which her chapter titled ‘Self-Nudging: How Tiny Tweaks Lead to Big Changes’ nicely conveys this same idea.

Jeremy Hunter is an associate professor at the Peter F. Drucker Graduate School of Management at Claremont Graduate University. He describes this process as “bending your future.” I LOVE that phrase and now use it frequently.

By making small shifts in our behavior we are literally ‘bending our future’ toward realizing more of our potential and being our best selves.

Richard Boyatzis is a professor at Case Western Reserve University. In 2006 he published his Intentional Change Theory. According to Boyatzis, research shows that we as humans are much more likely to make and sustain a behavioral shift if it is in service of becoming a ‘More Ideal Self’ as opposed to trying to fix something about our ‘Current Self.’

So, when we are working on shifting our own behaviors, it will serve us to leverage our own visions for own ‘More Ideal Self.’

Let’s look at the example we introduced above with the self-limiting behavior of ‘frequent interrupter.’ Instead of “I want to interrupt others less often,” how might we frame that in aspirational language? One example would be “I am a great listener.” The research shows that we are more likely to be pulled forward by this aspirational vision of the better self we want to become.

While it may be counterintuitive, spending time observing our self-limiting behaviors (SLBs) prior to trying to shift them will pay off. As we pay closer attention to our SLBs through self-observation, we’re able to identify the ‘stories’ we hold that often underlie them. This ‘inner’ work supports a sustainable ‘outer’ (behavioral) change. So much more to come….

Coach Your Self Up Development Program

All of this content is part of my ‘Coach Your Self Up’ training program that teaches self-coaching skills. Participants learn an approach and skills for making positive behavioral shifts that they can utilize for the rest of their lives, and they choose one of their own self-limiting behaviors to start working on immediately.

While it’s still early, I’ve delivered the program a number of times and the participant feedback has been great. For example, 95%(!) of participants to date have expressed an intention to use self-coaching skills throughout their careers.

I’m excited as this underlines the powerful impact this program can have in helping employees unlock potential and improve their effectiveness at work; and more broadly in other aspects of their lives.

Don’t hesitate to reach out if you’d like to discuss any aspect of the self-coaching topic.

More on Self-Coaching to Come